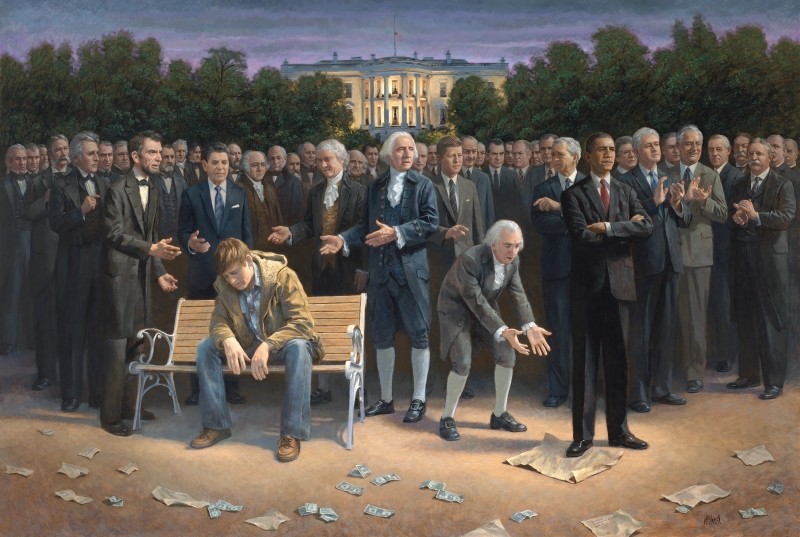 The Forgotten Man - The Painting

This historic image was painted by Jon McNaughton in 2011 in response to the passing of the Affordable Care Act (Obamacare). During the 2016 election the painting gained additional interest as Americans united to defeat Hillary Clinton. On the day of the election, Sean Hannity spoke of the significance of this painting and how it would take the forgotten men and women of America to rise up and save America. That night, as Donald Trump gave his acceptance speech he noted that because of the Forgotten Men and Women of America he was standing as the new President of the United States. The day after the election Sean Hannity purchased the original painting and publicly stated that this was the election of the "Forgotten Man."

All the Presidents of the past gather around a man sitting on a bench. That man, with his head bowed appears distraught and hopeless as he contemplates his future. some of the past Presidents try to console him and look in the direction of the modern Presidents as they exclaim, "What have you done?" Many of these modern Presidents behind Barack Obama seem to congratulate each other on their great success oblivious to the man on the bench. In front of the man, paper trash is blowing in the dust. Crumpled dollar bills, Amendments of the Bill of Rights and like a whisper - the US Constitution beneath the foot of Barack Obama.

Who is the Forgotten Man?

He represents every man, woman and child of every color and creed who is an American. Like you and me, he hopes for a better life, to find the American dream of happiness and prosperity. But now, because of unconstitutional acts imposed upon the American people by our government, we stand on the precipice of disaster. What will his opportunities be in the future?

Will he ever have a chance to realize the American dream? Please don’t sell out our future for the crushing debt imposed upon us by entitlement programs and heavy taxes. Why do you not uphold the Constitution? Do you think that redistribution of wealth, uncontrolled spending and free handouts for everyone at the cost of burdensome taxation and destruction of our financial system will lead us to some kind of Socialistic Utopia? How can our national debt lead to anything other than collapse? Abiding by the Constitution is the only way to preserve the hope for life, liberty and the pursuit of happiness. Each President takes an oath to protect and defend the Constitution. Mr. President, what have you done?

McNaughton Responses to Criticisms of The Forgotten Man

Jon explains more about the underlying symbolism below.